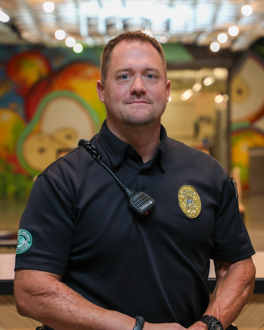 Brightwater Public Safety Officer Christopher Traxson is a United States Marine Corp veteran and originally from Rogers, Ark. He began his higher education at NWACC in 2001 by earning an associate degree, and then went on to obtain his bachelors and master's degrees.

Chris began his service with NWACC in 2013 as a public safety police officer, and since that time, has held several ranks and roles in the department.

"Brightwater is a hub of diversity, creativity and talent within the ranks of our staff and faculty. For this reason, its environment brings the best out of our students," says Christopher.

Although Christopher is not a Brightwater chef or instructor, he enjoys cooking Italian food. And in his free time, he likes to run, kayak, read and watch horror films.