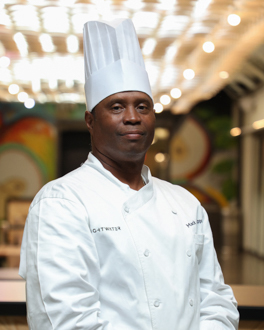 Mack’s culinary career spans over 30 years. During his previous work experience in Charlotte, Mack was the owner of the Renaissance Place Restaurant and Remember Catering, and then went on to work at the Quail Hollow Club for a total of 24 years; 14 years of those as the executive chef.

At Quail Hollow Club, Mack hosted the annual PGA Wells Fargo Championship and was instrumental in creating menus for weddings and events for esteemed guests such as Bill Clinton, Rick Hendricks of Hendricks Motor Sports, Margaret Thatcher and Arnold Palmer, as well as athletic celebrities such as Michael Jordan, Terry Bradshaw and Tiger Woods. Mack spent 14 years hosting An Evening with the Master Chefs, the annual Cystic Fibrosis Foundation charitable benefit that raised millions for the foundation. He also hosted The Confrère des Chevaliers du Tastevin (Fraternity of Knights of the Wine-Tasting Cup), that maintains a chapter worldwide called Sous-Commandries.

Mack then moved to Northwest Arkansas and became the executive chef at Pinnacle Country Club, and then joined Brightwater in 2017 with the intent to help train future chefs. In conjunction with his current position at Brightwater, Mack is the managing owner and executive chef of Mack ‘n Diane Champagne & Roses Catering.